Capture One has just released the Capture One 22 15.3 update with a bunch of exciting new features:

Plus, Capture One 15.3 brings Metal support on Intel macs, an ability to save on computer and card when tethering with Canon, and other improvements. As always, I’ve prepared a detailed overview of all the new features!

Last week I released my new book Capture One Hidden Features: 200+ Pro Hints to Enhance Your Capture One Workflow. 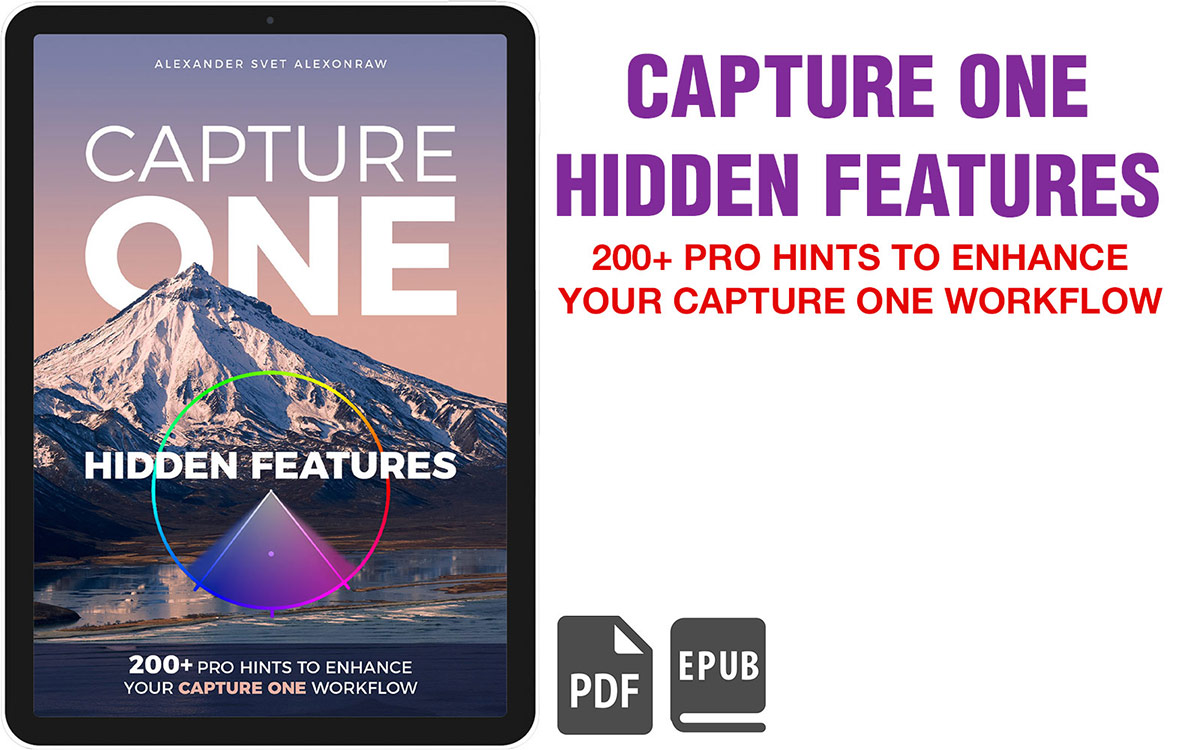 Cameron Davidson, an awarded photographer who took images for National Geographic, Discovery Channel, Forbes, Washington Post, and many others, shared his review of Capture One Hidden Features book:

“Capture One user since version 2.7.
Alex’s new book is a fantastic tool for old and new users of the best RAW file editor on the planet.
I always learn a new trick or way of approaching file processing after reading Alex’s blog and his new book full of tips and approaches to get the absolute best out of your raw files sits on my image processioning desktop Mac.
It is essential reading for any user who wants to improve their C1 skills.”

Till June 30, you can get the book with a 40% Early Bird discount! You’ll find the discount code at the end of this post; plus, five free Capture One styles are also waiting for you there!

Redesigned Tool Panel is the first thing you’ll notice when you run Capture One 22 15.3:

The tabs now have new larger icons, and the tools are organized differently among the tabs. Before we go into the details of this redesign, I’ll do some mind-reading magic. Here is the answer to the question you’re thinking about right now:

Yes, you can revert it to your regular workspace.

Well, the new design will remain anyway, but the tabs and the tools can be organized the way you are used to. Simply click the three-dot icon and choose Workspaces -> Default (Legacy) or one of your custom setups.

As I can guess, the idea behind the redesign is to make the interface more apparent for new users and, obviously, to make it consistent with the new Capture One for iPad. If you have tried the iPad beta, you’re already familiar with these icons:

This redesign might look a bit weird now, but it had to be done in the long term. Let’s see how to get the maximum out of the new Tool Panel.
First of all, you can rearrange tool tabs by pressing Cmd(mac)/Alt(win) and by dragging them in the required order:

Secondly, you can access all the Tool Panel settings by clicking the three-dot icon. Here you can add the Export tab if you prefer the old-style export workflow and switch to the Icons Only mode:

Since I always use my custom workspace, I’m ok with the new design. The icons make Capture One look a bit unfamiliar, but that’s fine to give your brain a bit of a shake sometimes.

In Capture One 15.3, developers have finally added Magic Eraser to accompany Magic Brush!

Magic Eraser has all the same settings as Magic Brush: Check out my Magic Brush overview if you’re new to Tolerance and Refine edge sliders.
Using Magic Eraser, you can now quickly remove unwanted parts of the mask. For instance, here, it’s easier to remove a mask from the sky and water than to draw a mask on the trees:

Now, I can add color and exposure adjustments to enhance the look of this forest and the boats: BTW, this RAW file is available in my new 100 RAWs Set for Image Editing Practice. So that you can download the RAW and experiment with your way of color grading!

Sony photographers can now shoot tethered over a wireless network, having the same functionality as regular USB tethering. To connect your camera, simply follow two first steps from this guide, and then find your camera in the Camera tools in Capture One.
At the moment, support is available for the following cameras:

Save to card and computer when tethering with Canon

Canon photographers can now decide on where to store images during shooting: on a card, computer, or both. Also, you can set up different locations for RAWs and JPGs. For instance, RAWs can be saved to a card, and JPGs will go to your computer.

Capture One 15.3 introduces Cloud Transfer features designed for syncing images with Capture One for iPad.

According to develops, Capture One for iPad is going to be released on June 28, so I’ll return to this feature in my overview of the iPad app.

Style Pack functionality has got a bunch of useful updates in Capture One 15.3.
First of all, you can now delete entire folders with styles right from Capture One: Plus, you now get a notification that a style set is installed:

Previously, you could mistakenly install the same set several times due to the lack of the confirmation message. You can download 5 styles and 5 style brushes from the new Pro Color Grading Styles set free of charge!

The five styles and style brushes include: Save $30 with Styles + eBook Bundle

Till June 30, you can save $30 by buying the Pro Color Grading Styles in a bundle with my new Capture One Hidden Features eBook.
Simply enter this code at checkout: ALEXNEWS40 If you want to buy just the book, this code will give you 40% OFF the eBook!

Capture One Live has got three helpful improvements:

You can now leave comments on web for Live shared images.

Watermarks can now be applied by choosing a recipe with a watermark in the Live Session settings:

You can now rate and color tag images with keyboard shortcuts in a browser:
Star ratings: 1-5, and 0 resets the rating.
Color tags: W, E, R, T, Y, U, I, and Q resets the color tag.
Navigation: left and right arrow keys. Escape key to return to the gallery.

Finally, there are several minor improvements in the 15.3 update.

Separate Crop Aspect Ratios for Images
In 15.3, the Crop tool shows an aspect ratio belonging to a selected image.

Preview size recommendation
Capture One now offers a recommended preview size based on your screen resolution:

In my book, I’ve offered a different solution based on the area your image occupies on the screen. I’ll try to investigate this, but at the moment, I think that the Capture One recommendation includes users who might switch to Full Screen mode during the editing. In this case, you definitely need to have your preview size not smaller than your screen resolution.

Metal support on Intel Macs
Capture One 15.3 now uses Metal for hardware acceleration instead of OpenCL on Intel-based macs. Previously, OpenCl was the main reason for almost all app graphic bugs, so we’ll see how Metal will perform now.

Support for multiple DPI scaling (Windows)
According to developers, Capture One now retains similar physical size for the application layout when used with multiple monitors that have different DPI scaling

Pre-Upgrade to Capture One 22 with a 28% Discount